After 100 years in business
Isuzu
has some stories to tell! 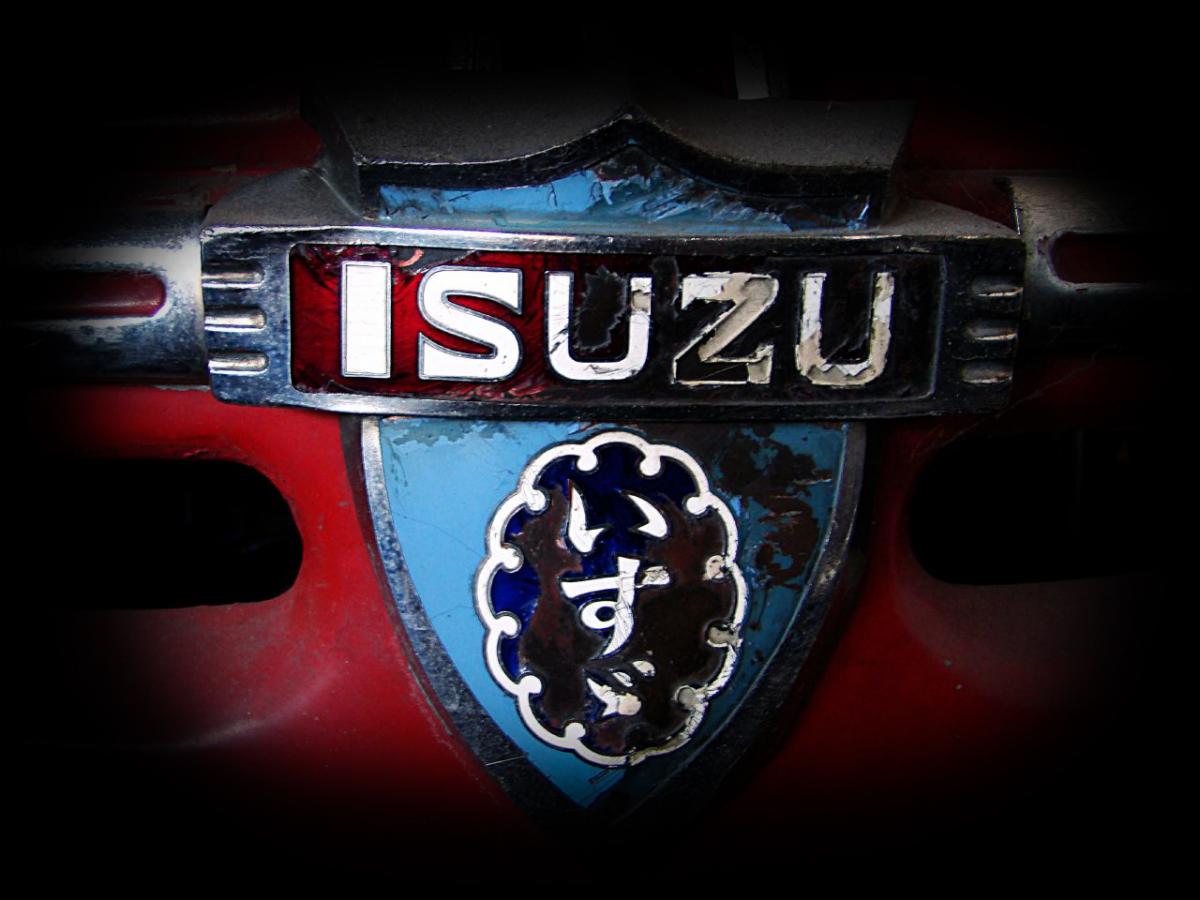 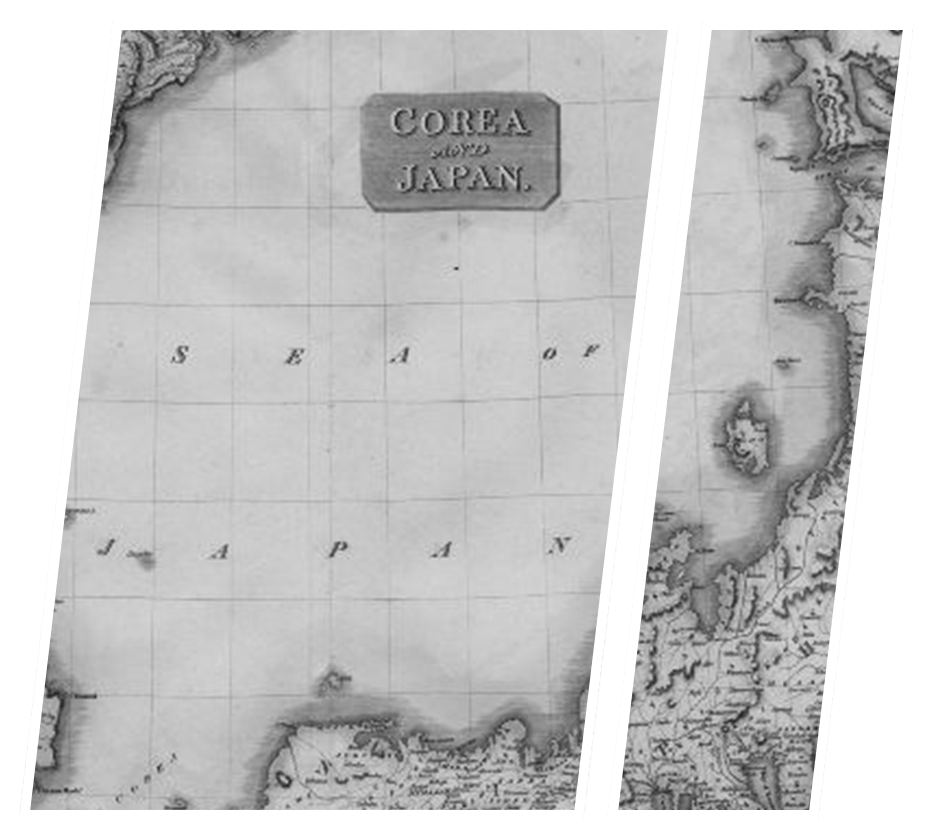 The history of Isuzu begins in Japan over 100 years ago, in 1916, when Tokyo Ishikawajima Shipbuilding and Engineering Co. Ltd., established in 1893 and Tokyo Gas and Electric Industrial Co. begin a collaboration for the construction of a motor vehicle factory.

Between Japan and England

The production of vehicles begins in collaboration with a British car manufacturer, Wolseley Motor Ltd. Founded in the late 1800s by thirty-year-old Herbert Austin, the brand will exist until 1975 and, after producing some models, in 1918 it entered into agreements with the Ishikawajiama Ship-Building and Engineering, which led to the production of new vehicles, starting in 1922. 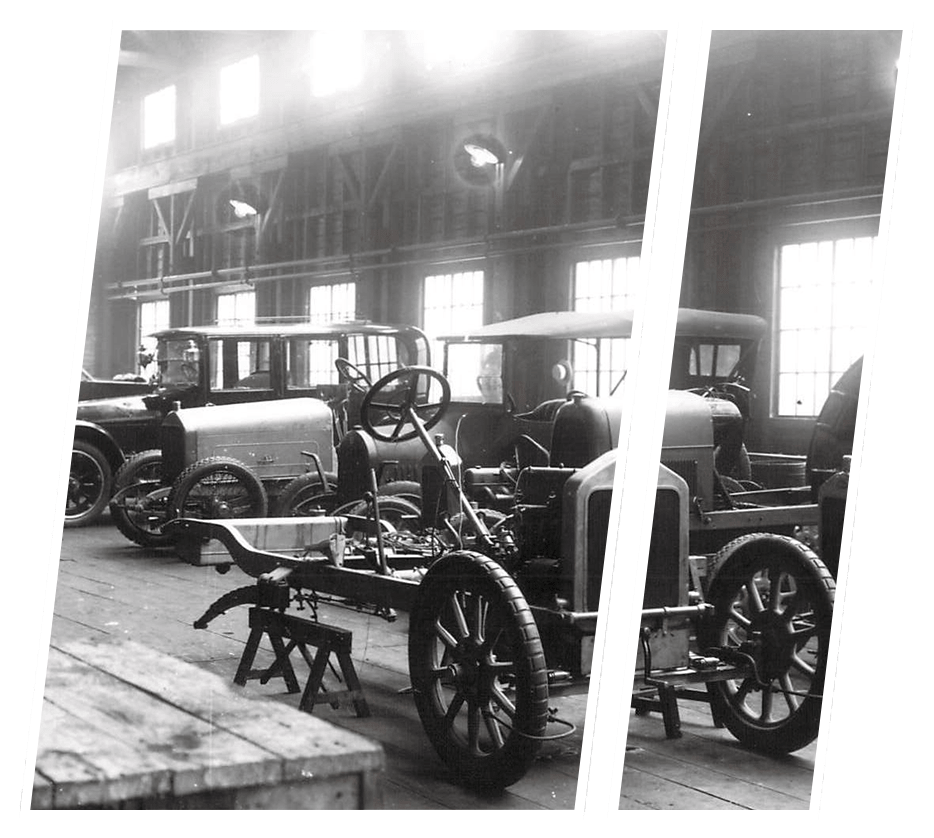 After 4 years of development, Tokyo Ishikawajima Ship-Building and Engineering presents the first passenger transport vehicle produced in Japan, the Wolseley A9. It was a vehicle with components from the United Kingdom, but some others, such as the bodywork and the engine, were entirely designed and manufactured at the Tokyo Ishikawajima Ship-Building and Engineering plants. A car with a 2.6 l 4-cylinder engine, capable of delivering up to 11.6 kW, and equipped with an overhead camshaft derived from the same technology used for the airplanes of the time. A series of innovations that have laid the foundations for the future starting from the Wolseley A9, today universally known as "the first car built in Japan in the world".

The "Sumida CL" model presents the first improvements in terms of fuel efficiency and power. The name "Sumida" derives from the homonymous river, near which the production plant was located. The following year, in 1929, after numerous models and improvements, the "Sumida M Bus" was born, the first bus model produced in Japan, which over the years will contribute to the development of an increasingly modern public transport network. 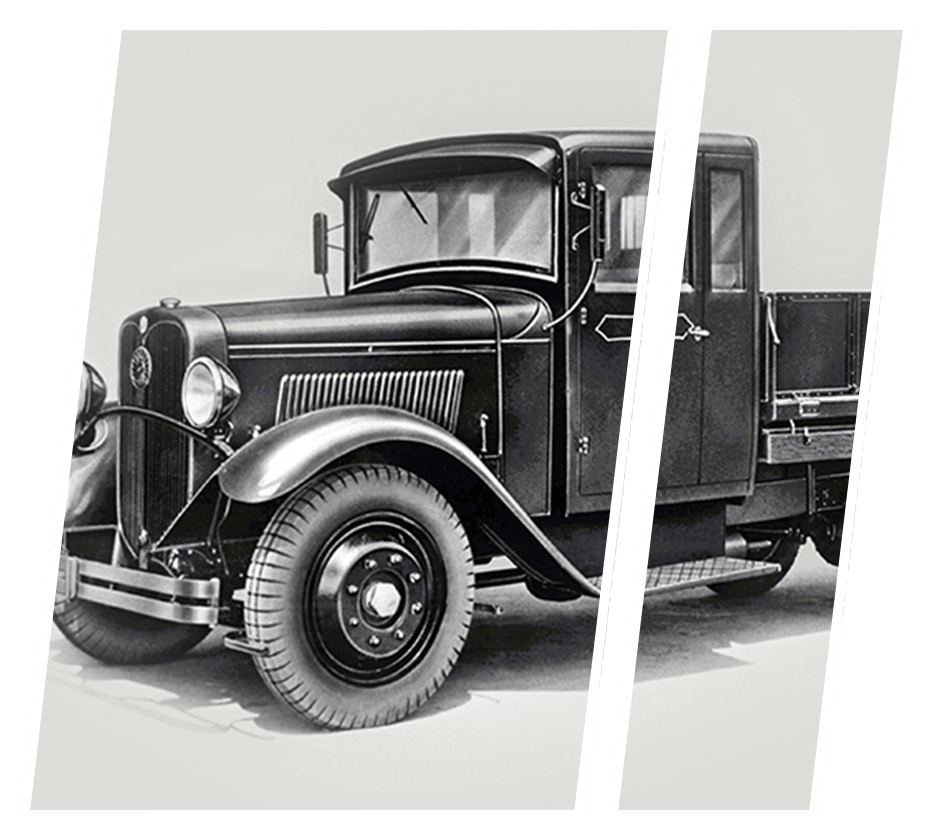 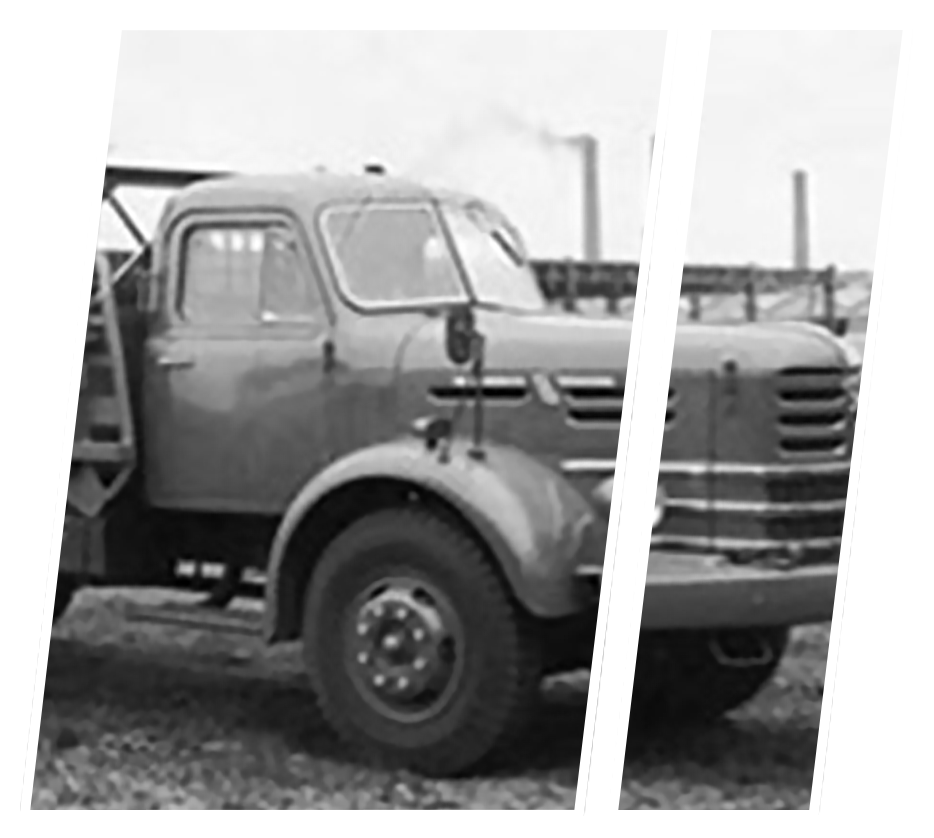 In 1933, the Ishikawajima Automotive Works, after merging with DAT Automobile Manufacturing Inc., changed its name to "Automobile Industries Co., Ltd" and began production of a vehicle that followed the standards dictated by the government of the time.

At the origins of the name

In 1934, after a meeting between the company and the Japanese Ministry of International Trade and Industry (MITI), the vehicles, initially marketed as “Sumiya "and" Chiyoda "were called" Isuzu ", from the name of the river. which has its source and its mouth in the city of Ise, in the Prefecture of Mie, Japan, whose literal meaning is “50 bells.” The Isuzu River is particularly noteworthy as it flows through the Great Temple of Ise and it is crossed by the Uji Bridge, entrance of the Great Temple of Ise. Given its proximity to the Sacred Temple, the Isuzu River has often been revered and mentioned in numerous poems and songs, which are still handed down through the centuries. 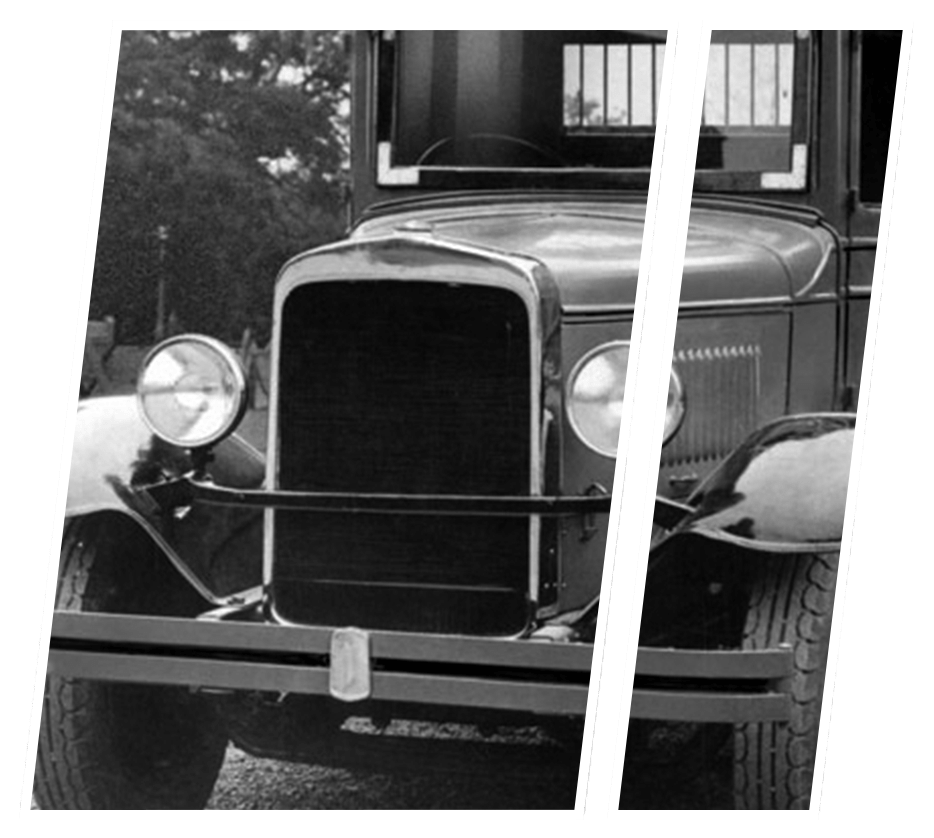 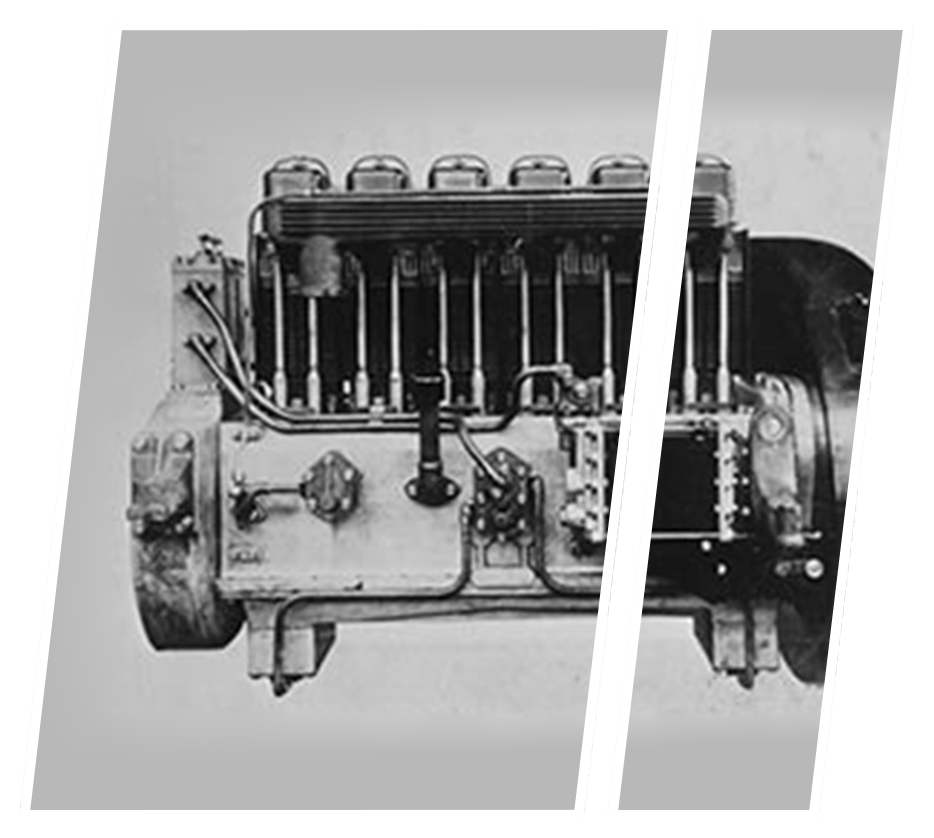 The advent of diesel engines

The first air-cooled diesel engines for motor vehicles, the DA6 and DA4, are developed and produced. From this moment, the evolution of ISUZU engines will also begin and it will lead to the development and realization of the current engines present on vehicles today. 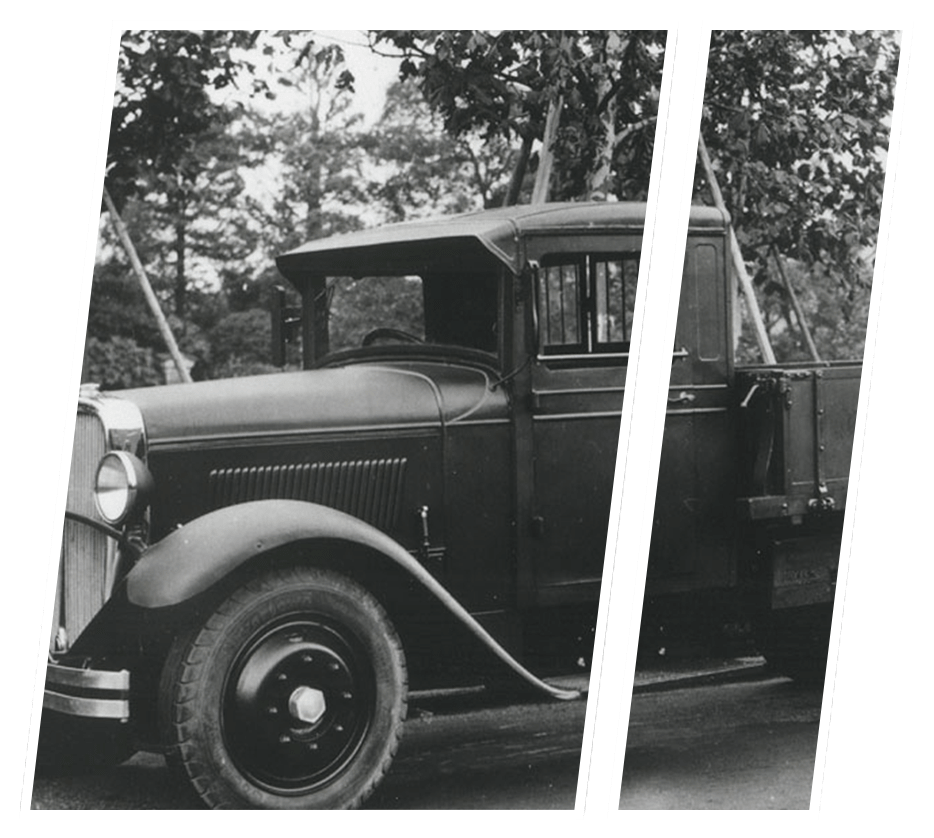 Production of the TX40 model began in August 1938, a truck with a payload capacity of up to 2 tons, which was characterized by its being particularly solid and powerful.

The story continues and from January 1948 the production of the diesel powered bus model BX91 begins, capable of carrying up to 50 passengers, which will be the basis for the construction, starting from 1949, of numerous other bus models. 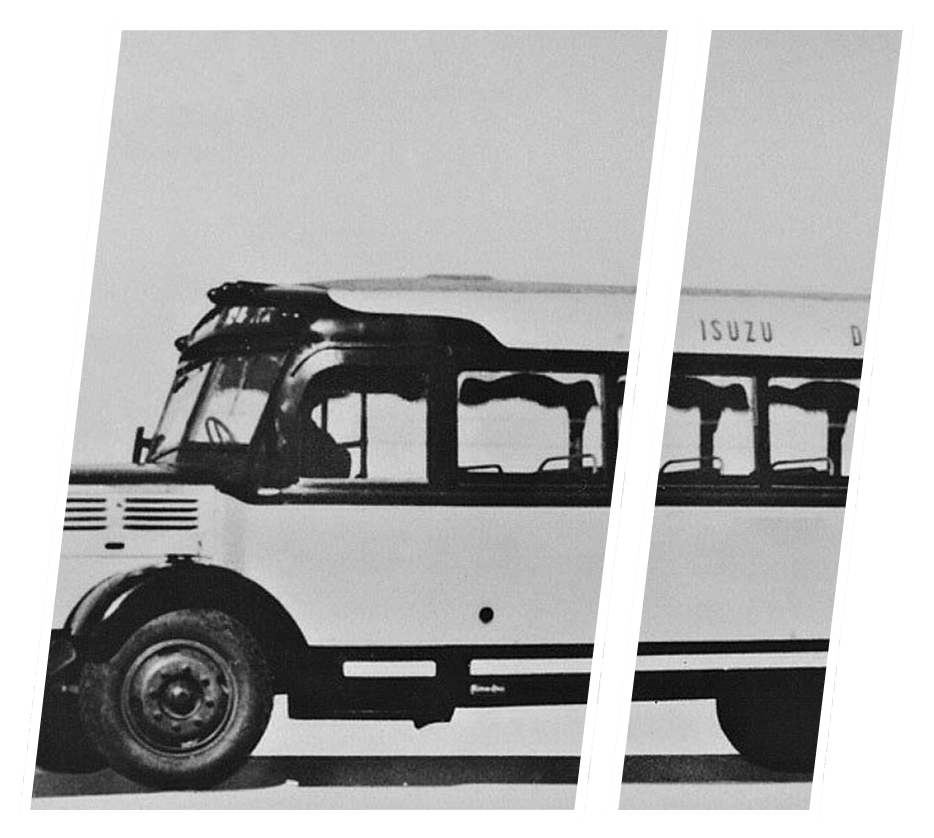 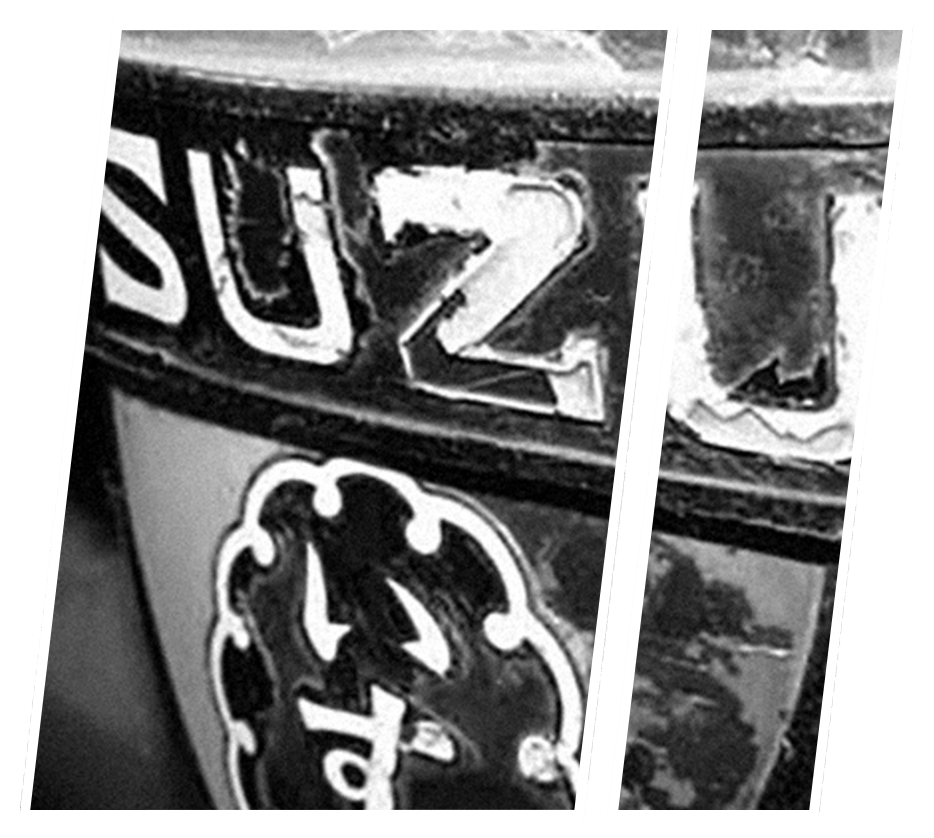 The company's name changed permanently to "ISUZU Motors Limited", with an increase in invested capital of 150 million yen. In the same year, the first vehicle exports to Hong Kong begin.

After an agreement with the Rootes, Ltd. UK Group, the first production line of the new passenger vehicle, the ISUZU Hillman Minx, is inaugurated. Four years later will be produced with components manufactured entirely in Japan. 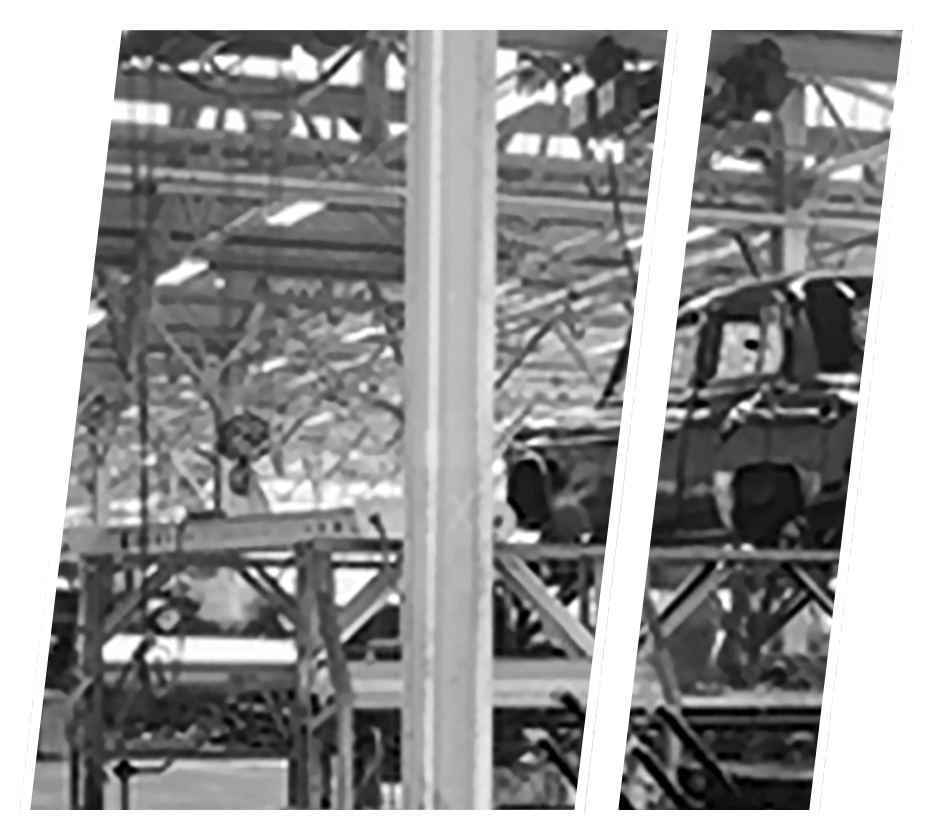 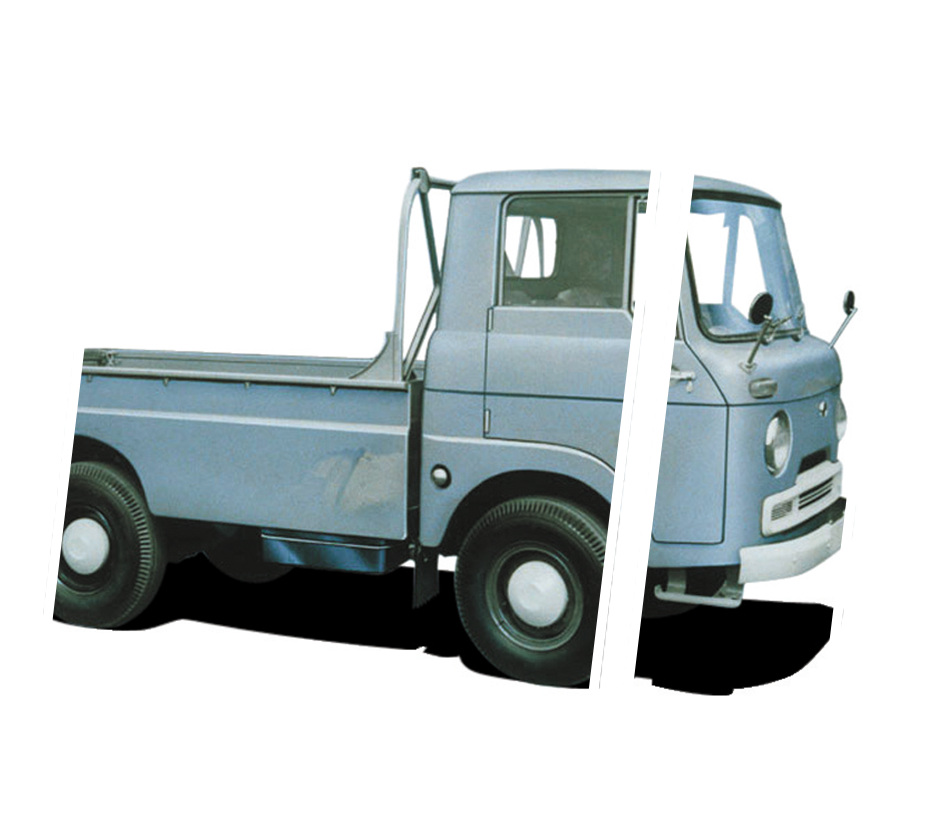 In 1959, Isuzu launched its first light truck, the ELF, on the Japanese market, the progenitor of what would later be known universally as the "Isuzu N Series".

In January 1961, with a load capacity of almost 2 tons, ELFIN was presented to the public. The newly developed DL201 engine represented excellence for the diesel engines of the time. 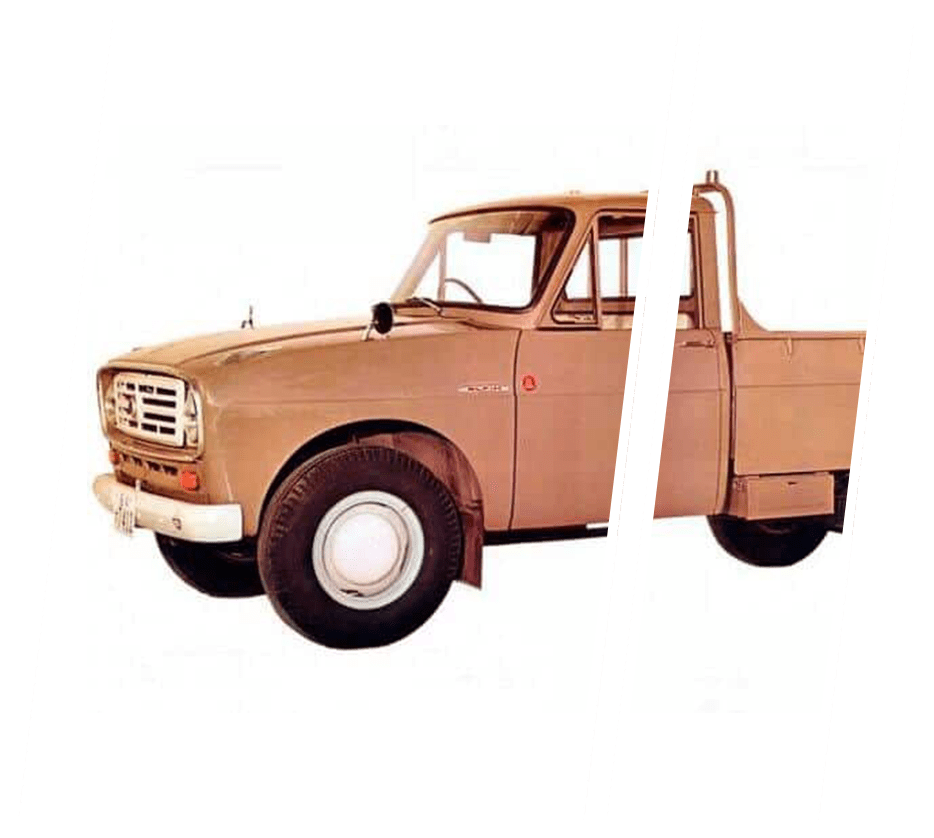 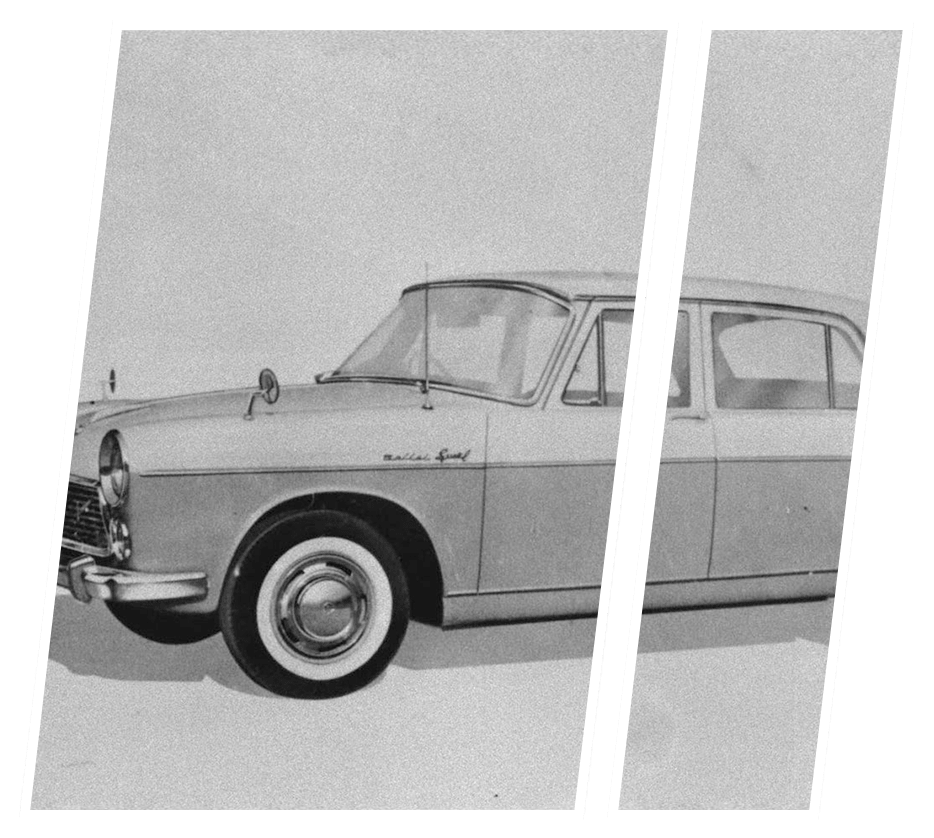 In October of the same year, a new passenger car, the Bellel, was presented to the public. The first vehicle whose design was totally conceived by Isuzu and the first Japanese passenger car with a diesel engine, it was particularly appreciated thanks to its use as a taxi.

1963 is the year of presentation of the ISUZU compact truck, the Wasp, the commercial variant of the Isuzu Bellett, which will be marketed in the 1325 cc and 1764 cc versions and produced until 1972. 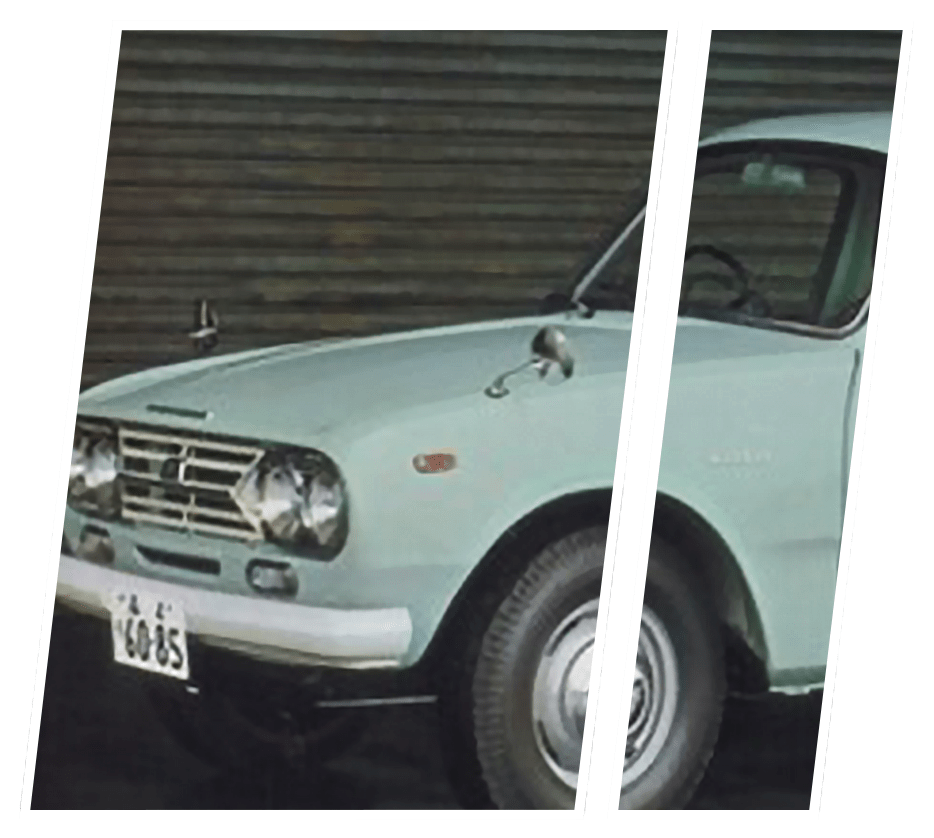 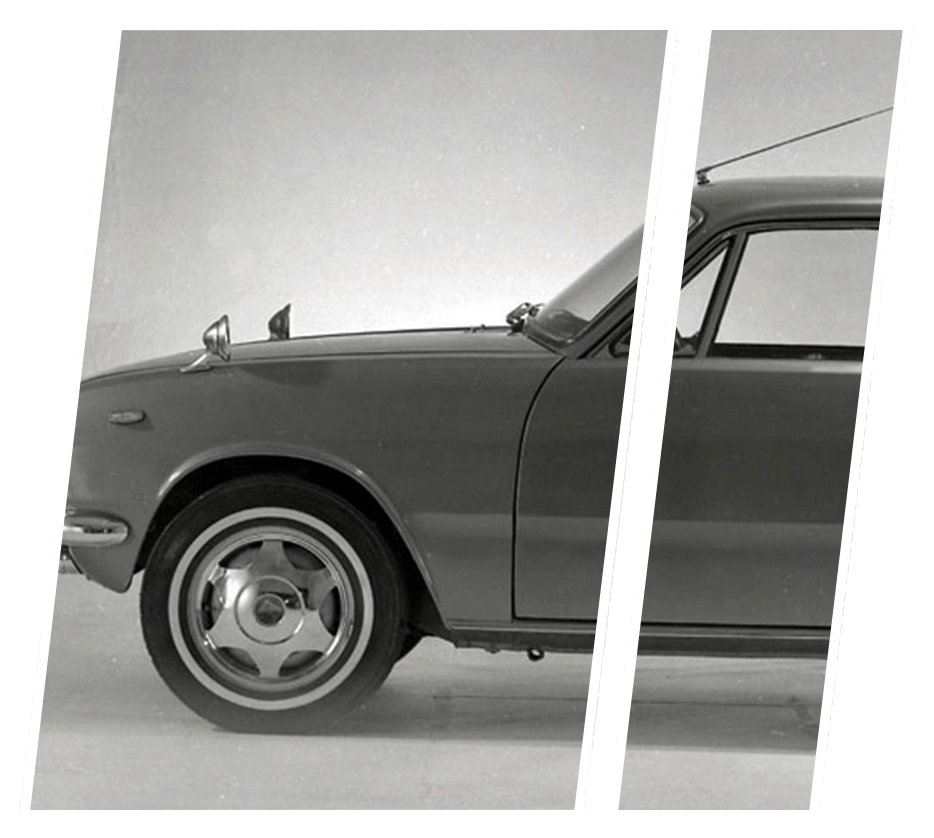 In April 1964, the "Bellett" series was presented, the first ISUZU vehicle exported to Europe, whose range included the Japanese company's first sport car, the Bellett 1600 GT. The Bellett 1600 GT was also produced in the GT-R (racing) version, and the vehicle can also be used in the famous Gran Turismo 4, 5 and 6 video games.

The "TY" truck, the 4-ton "Medium Heavy Duty Truck", later renamed "FORWARD", precursor to what is now universally known as the "Isuzu F Series", makes its appearance on the market. 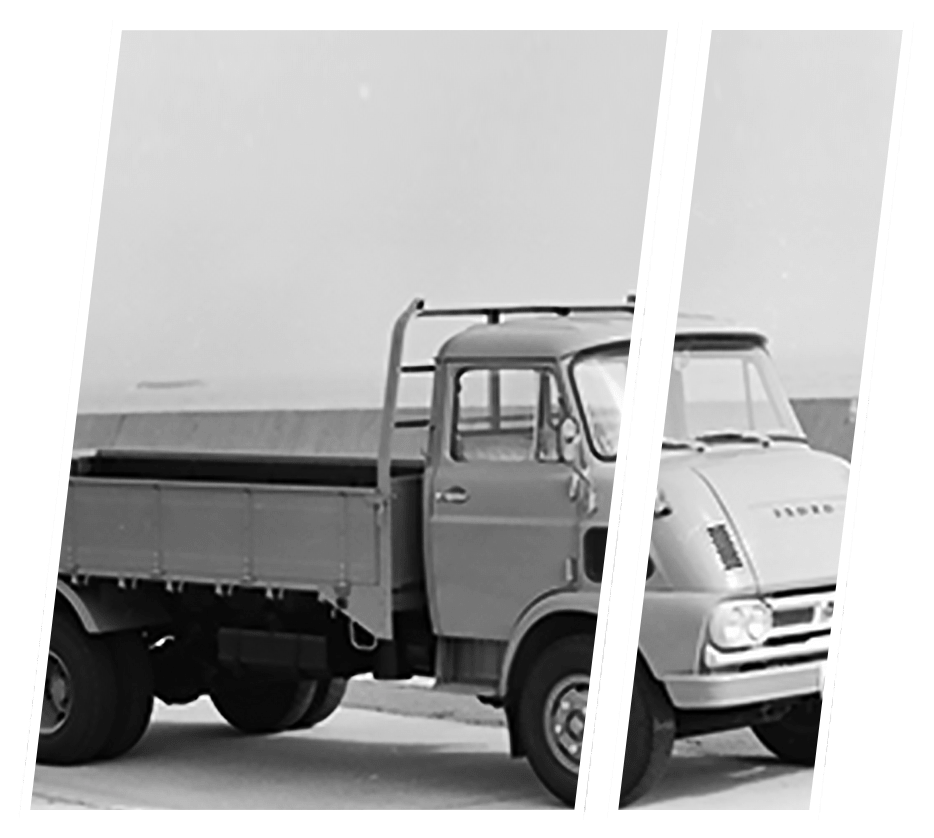 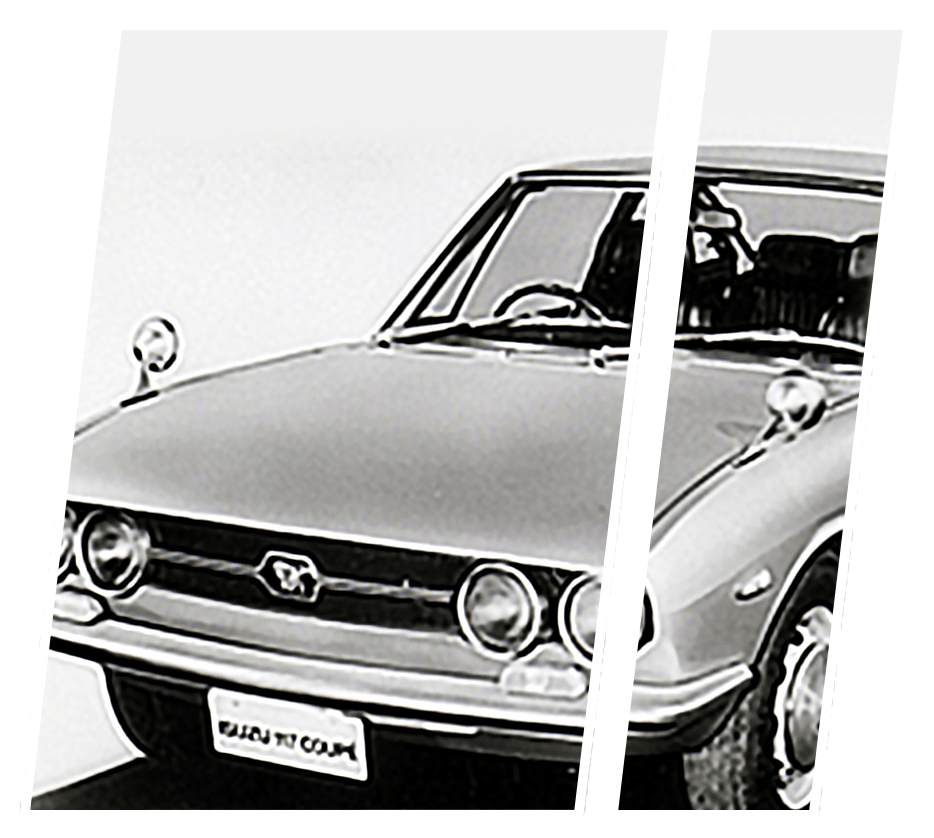 The debut of the coupe

This is the year of the ISUZU 117 Coupé's debut, shown for the first time to the public at the Geneva Motor Show in 1966 and famous also thanks to the fact that its lines were made by Giorgetto Giugiaro.The car has been sold since 1968 on an average of 50 copies per month.

Equipped with a 1584 cm³ four-cylinder engine derived from the Bellett, the engine delivered 120 HP at 6400 rpm and, coupled with a four-speed manual transmission, allowed the car to reach 190 km / h. This version was flanked by the EC, with the Bosch electronic injection engine boosted to 130 HP, and the quieter 1800 and 1800 N, with an 1817 cm³ carburettor engine, respectively capable of delivering up to 115 and 100 HP.

Since 1972, Isuzu begins production and marketing of the Isuzu Faster pick-up, which will be produced until 2002. The diffusion of this vehicle will be facilitated also thanks to the agreement between Isuzu and General Motors (GM), which will distribute Isuzu Faster in Europe through its "Bedford" branch. The vehicle will then be called "Bedford KB" or "Isuzu KB". 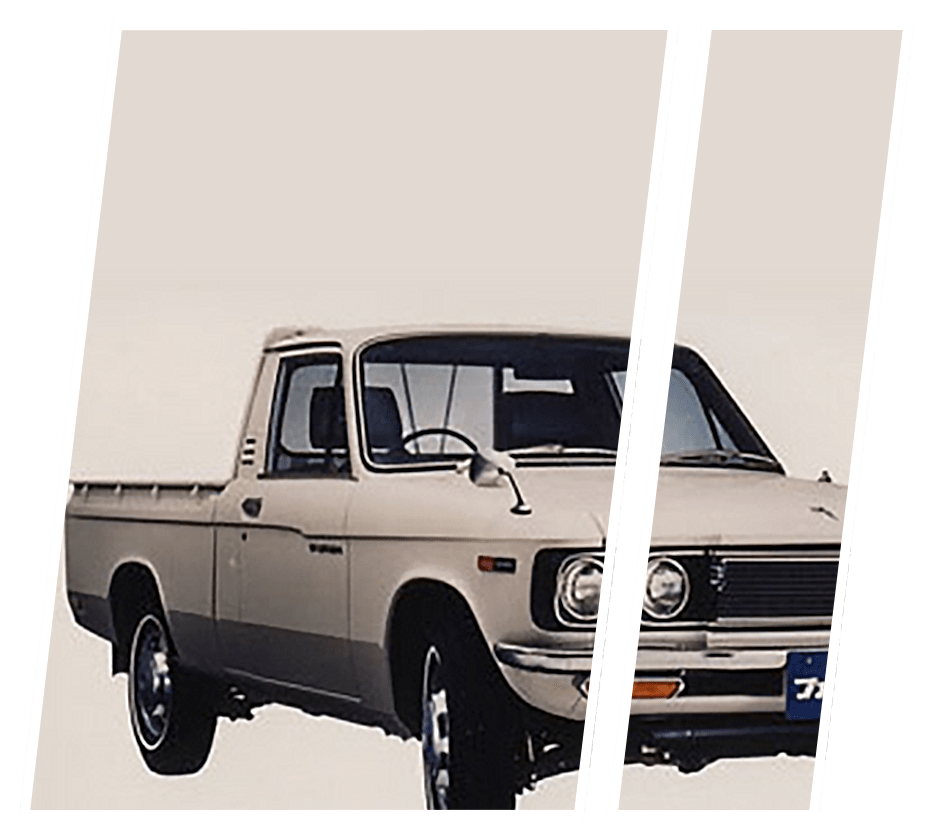 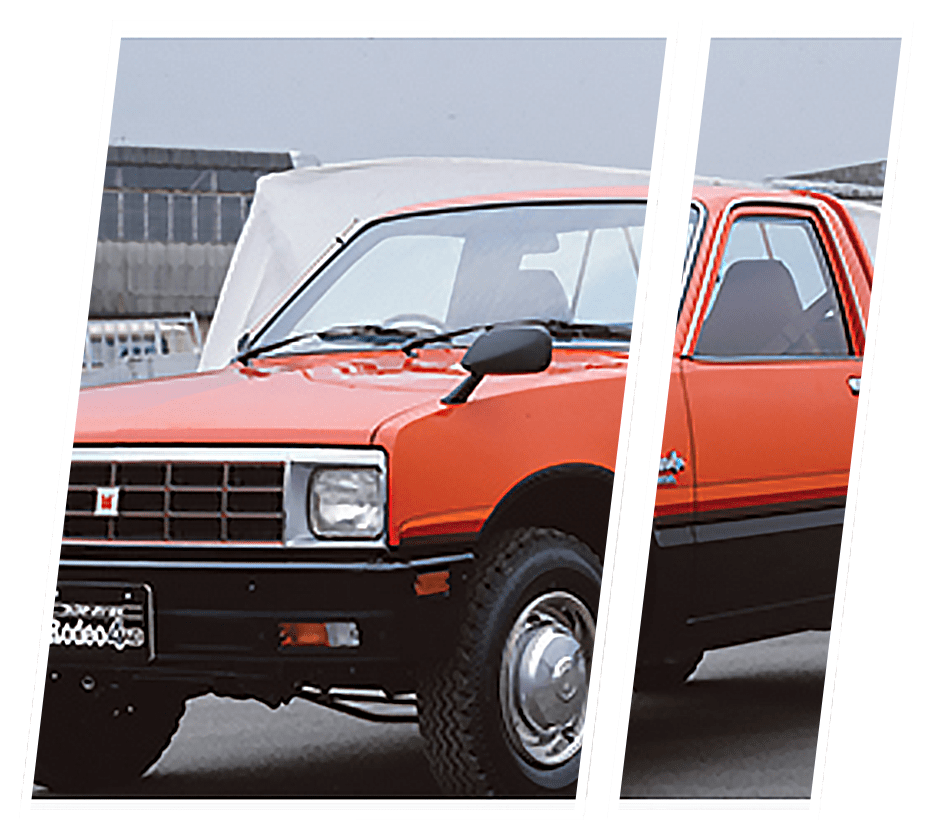 The "Faster-Rodeo" is introduced, a 4x4 version of the Isuzu Faster, whose first generation will be produced until 1980. Between 1980 and 1988 the second generation was produced and marketed, which was the first, starting in 1982, to be offered in 3 possible different cabins: "Single Cab", "Double Cab" and "Space Cab".

19 79
A revolution for the automotive world

Designed in 1966, the fifth work by Giugiaro, the car that will give life to the Isuzu Piazza, considered the ideal successor of the Isuzu 117 Coupé, we are talking about the Isuzu Asso di Fiori by Italdesign.

Vehicle born at the end of the 70s and which preserves the floor of the Isuzu Gemini 1800, at the 1979 Geneva Motor Show it will present itself as a real revolution for the world of the automobile, with some characteristics that, from this moment, will be adopted by a third of the cars produced between 1981 and 1987. The elimination of the external drips, replaced by a gutter in the door stop gasket, the windows flush with the bodywork, integral doors and hatches, that is with a design that allows the sheet to wrap and covering the central pillar and the roof, are the peculiar characteristics of this Isuzu car, which mounted a 4-cylinder 1818 cc engine capable of delivering a power equal to 130 hp. 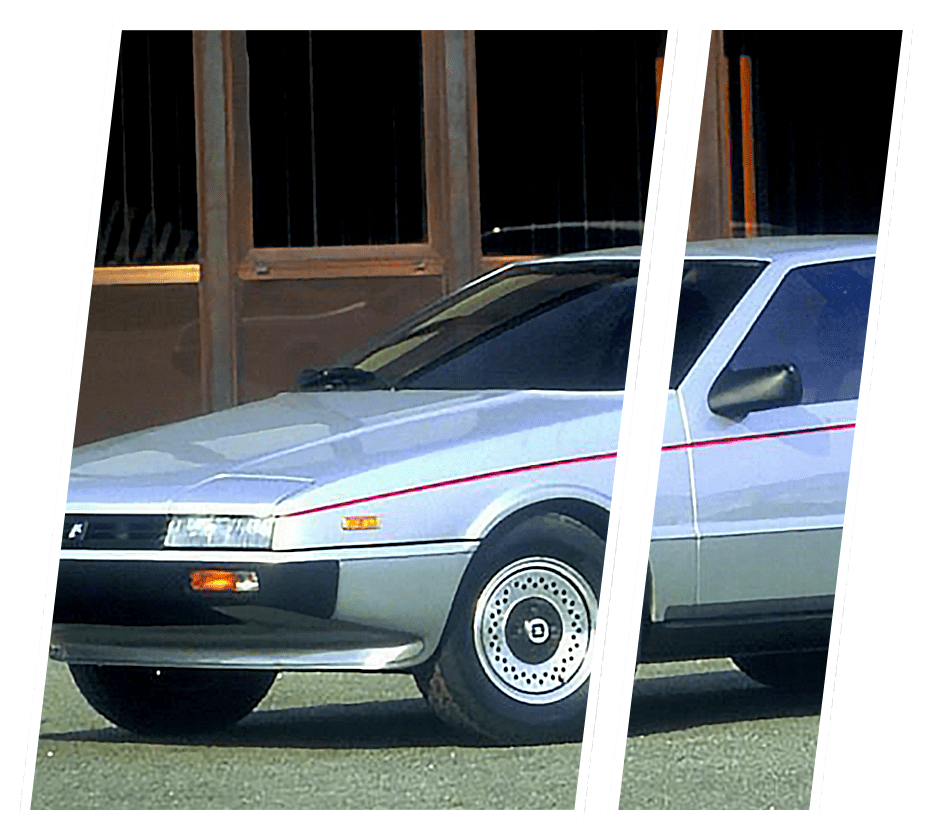 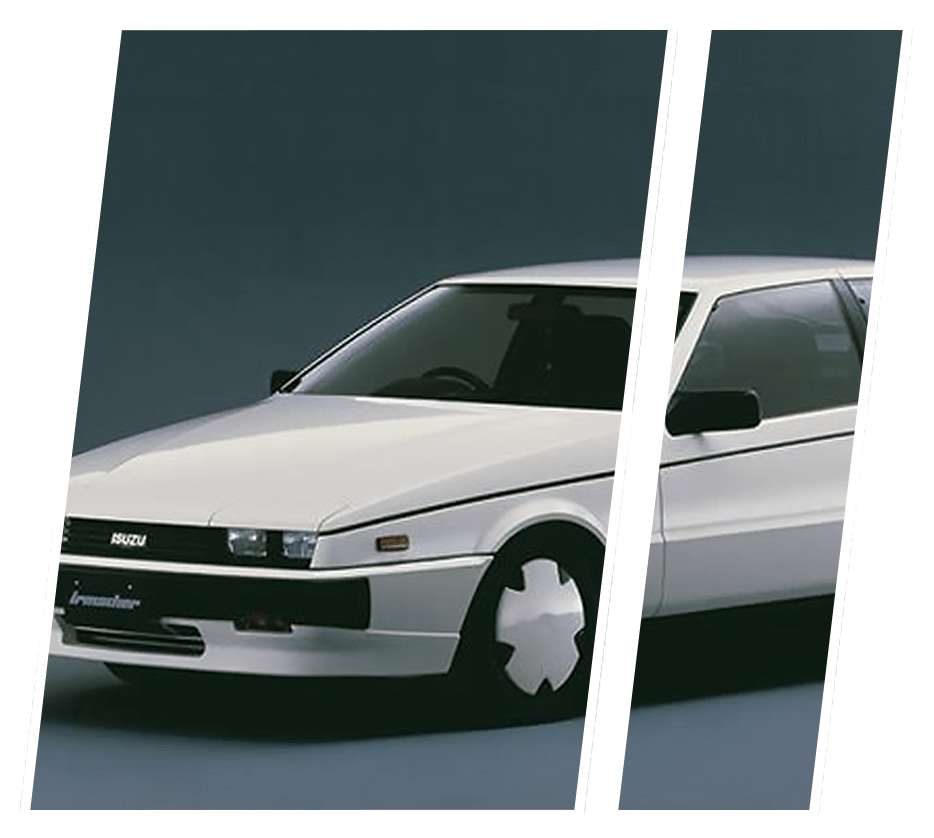 In 1978 Giorgetto Giugiaro was commissioned to design a new Isuzu sports car to replace the 117 Coupé, also designed by him.

His design was presented at the 1979 Tokyo Motor Show and, after being critically acclaimed, production of Isuzu Piazza began in Fujisawa in September 1980 in Japan. Proposed on the North American market with the name of Isuzu Impulse and on the Australian market as Holden Isuzu, in 1985 it was subsequently introduced also in Europe, where it is still known and appreciated today with its original name, Isuzu Piazza, in fact.

19 81
A cult vehicle among enthusiasts

1981 is the "Year of the Trooper", known for a short time in Japan as "Isuzu Rodeo Bighorn". Initially equipped with 1.9 to 2.2 liter engines, the first series was produced until 1991. Since 1992 the Trooper has been updated to a second series and marketed in Europe as Opel Monterey, becoming more comfortable, more powerful and more equipped. The equipped engine is a 3.2 liter and since 1996 some models have the "Shift-On-The-Fly" system, to insert the 4x4 with the vehicle in motion. The second generation will be produced until 2002, but still today the Trooper is a cult vehicle among enthusiasts, capable, over the years, of also winning numerous prizes in various competitions. 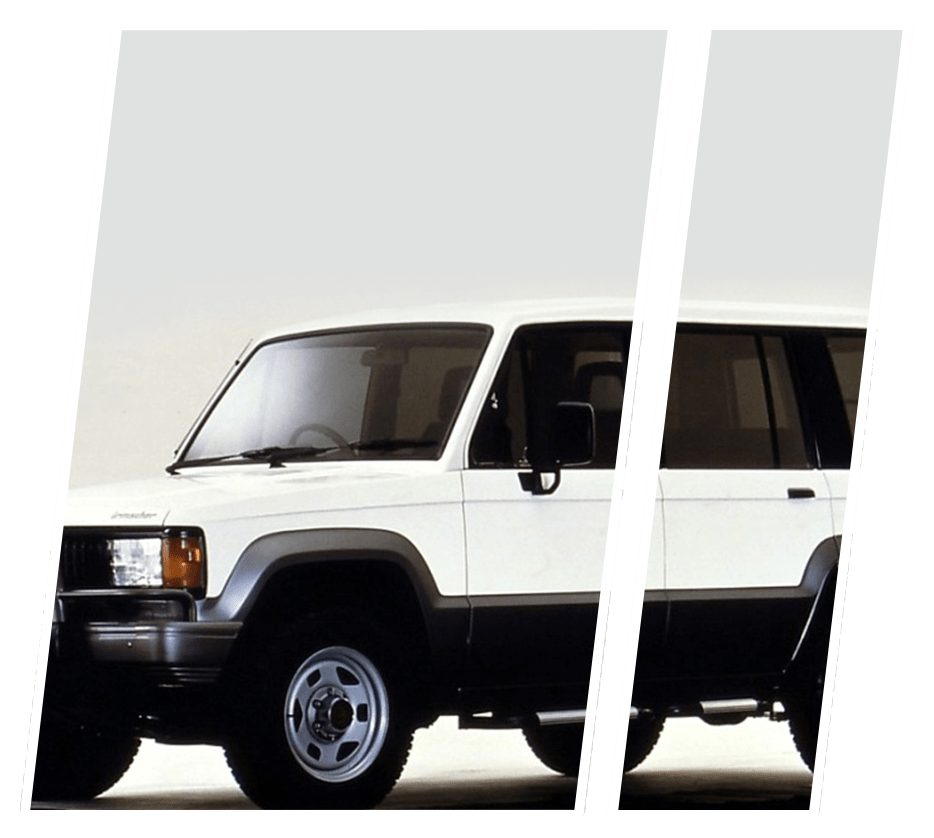 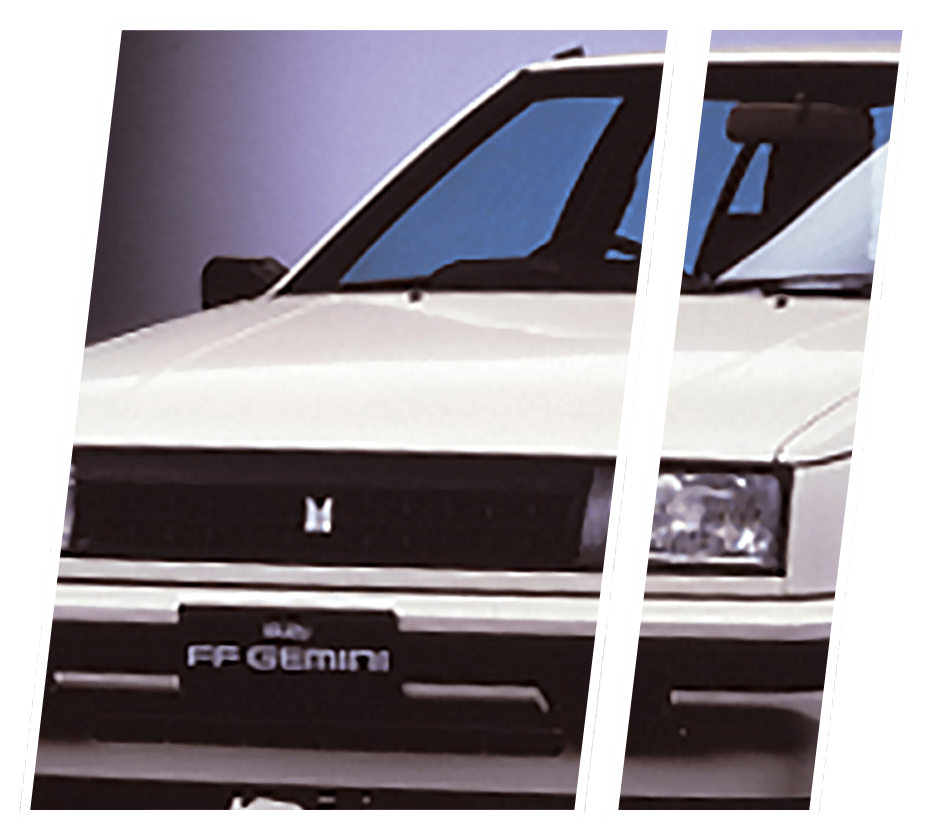 Produced in different versions from 1974 to 2000, the Isuzu Gemini was a subcompact car, whose design was commissioned to Giorgetto Giugiaro, who also designed the Isuzu 117 Coupé, and the Isuzu Piazza.

The first series, initially called Bellett Gemini, was born in late 1974 thanks also to the alliance made a few years earlier with General Motors. Available with 4-door sedan body and 2-door coupe, the drive was rear (Isuzu Gemini RR) and engines, also rear, powered by petrol or diesel, were available.

The second generation of the Gemini had engine and front-wheel drive and took the name of Isuzu Gemini FF, an appellation then abandoned from 1987, in favor of the "Isuzu Gemini" only.

We spill the beans every Tuesday at 11:00
Join us!